The interior of Westminster Cathedral is unfinished. It was always the intention that future generations would gradually complete the decoration, and that work continues today.

From darkness into light

John Francis Bentley died before he could leave a complete set of instructions for the future interior decoration of the Cathedral and his vision has needed to be interpreted over the decades. The design details that he left were extraordinary.

His close collaboration with the building firm of Brindley and Farmer meant that the marble design was largely achieved to his specification during his lifetime and we have William Brindley to thank for sourcing the beautiful marbles which embellish the Cathedral.

Bentley wanted the lower reaches of the Cathedral to be clothed with marble and the upper reaches in mosaic. The roof spaces of the Cathedral are dark, with a century of soot and candle-smoke blackening the brickwork. The finished chapels however are bright with mosaic colour and decoration and give us a glimpse of the architect’s vision.

The Cathedral was built for electric light and the elaborate eastern-style fittings complement the interior. The lighting pendants of the nave were erected in 1909, reminiscent of the metal lamp holders in Hagia Sophia which was once the greatest Byzantine church in Christendom. Intricate light fittings were designed for individual chapels. At every turn, you will see something different. 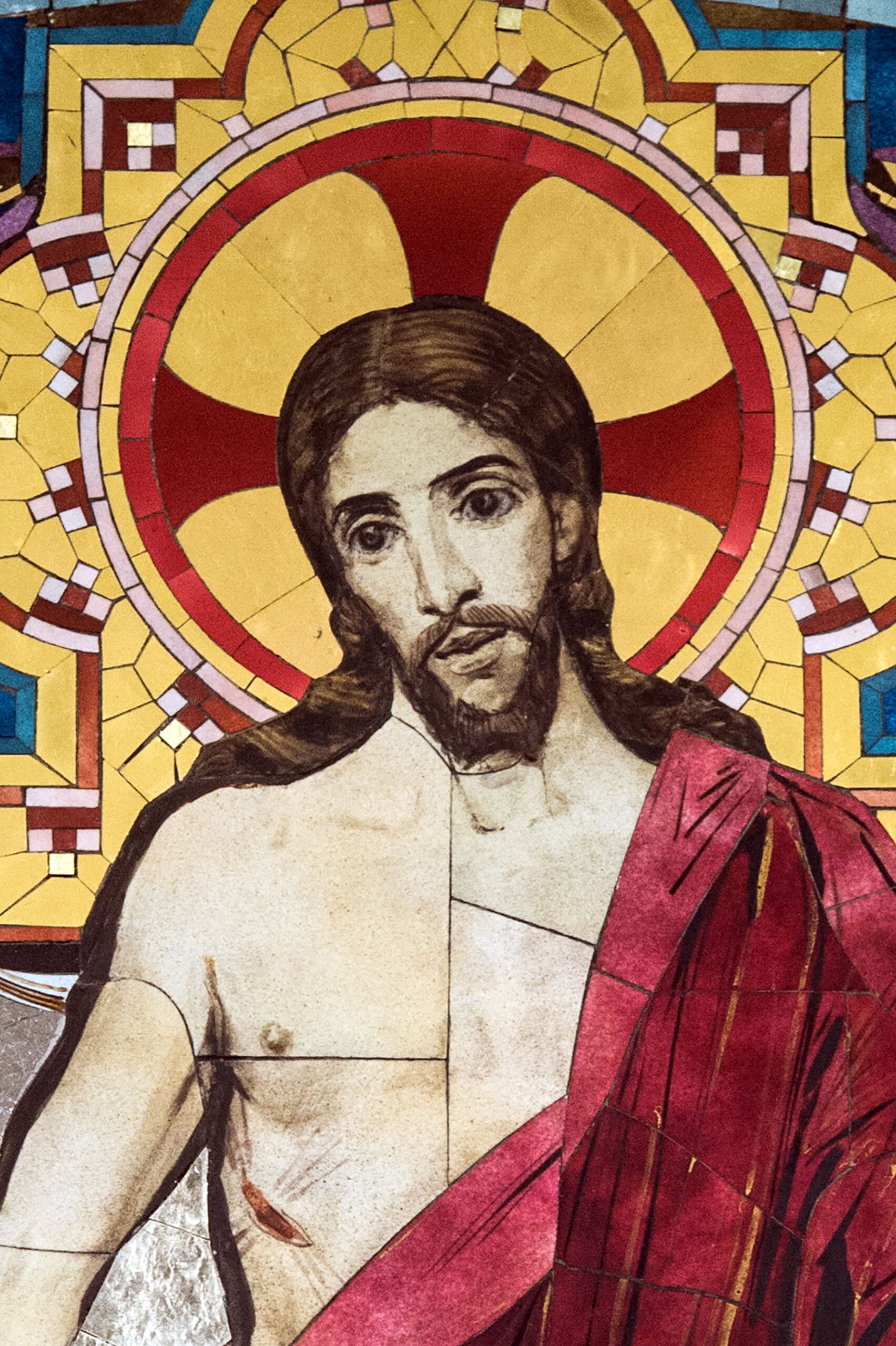 The Rood Cross dominates the interior space of Westminster Cathedral. Thirty feet high and carved in wood, the cross was made in Bruges in Belgium from a design by John F Bentley. The design for its decoration was prepared by William Christian Symons. Christ crucified faces the congregation with images for the four evangelists at the points of the cross; the reverse, facing the sanctuary, shows Our Lady of Sorrows.

Bentley had intended that the cross should hang over the baldacchino but it was found to be too large and was brought forward to hang between the sanctuary and the nave. The figure of Christ is 18 feet high on a vermillion canvas ground bounded by an edge of green. The touch of contrasting colour was added at the suggestion of the artist John Singer Sargent. 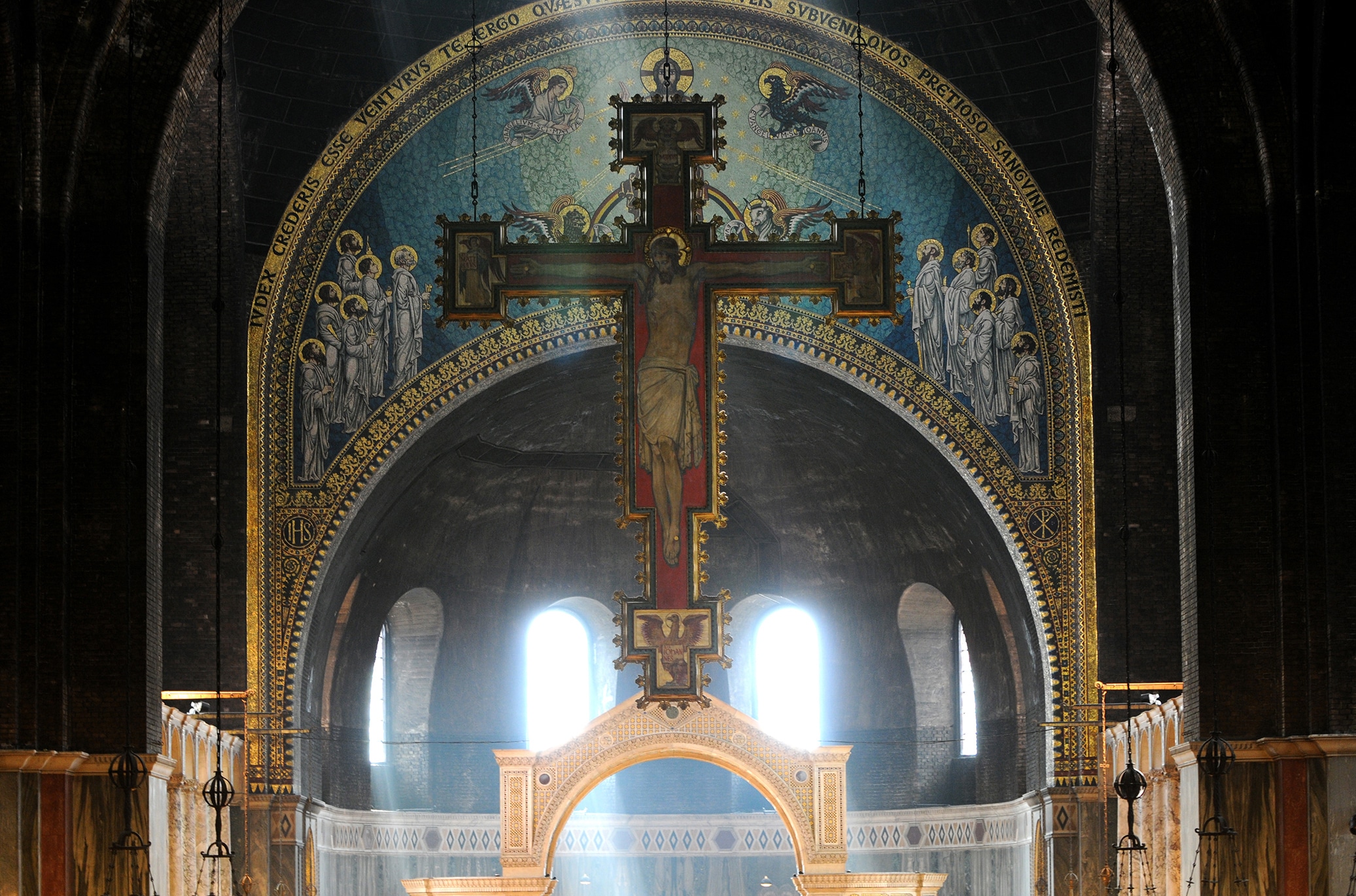 The Stations of the Cross

On the piers (columns) of the nave are the 14 Stations of the Cross, carved in low relief in Hopton Wood limestone by Eric Gill. The panels are best seen in the early morning or late afternoon when shadows elevate the detail. In all but two, the figure of Christ faces the nave. The Stations were paid for by individual donors and there are dedications at the foot of each pier.

The set was commissioned in 1913 and finally completed and dedicated on Good Friday 1918. Gill regarded the set as a ‘statement without adjectives’ and their stark simplicity as a focus for prayer.

‘Let there be light!’

Marbles from across the world

Over 100 different varieties of marble decorate the interior of Westminster Cathedral – more than any building in England. The marble was sourced from 24 countries across the world, including formations that we know were quarried by the ancient Greeks and Romans.

The six yellow marble columns of the baldachino over the High Altar are particularly striking and, as you first enter the Cathedral, these stand out in the darkness of the interior. The columns came from Verona and were the second set delivered. The first set, in a semi-translucent onyx, had to be rejected – three were broken and another was badly cracked. The two remaining columns went to the Lady Chapel in the Birmingham Oratory. The green pedestals for the columns came from Thessaly in Greece; the same marble may be found in Hagia Sophia in Istanbul.

There is some English marble in the Cathedral. A light grey Derbyshire fossil from Wirksworth and another Wirksworth stone – Hopton Wood which was also used for the Stations of the Cross.

The artists who brought colour and light to the interior

The mosaic decoration in Westminster Cathedral represents changes in taste and style over 100 years. Leading artists have contributed to the more recent decoration including Boris Anrep (Blessed Sacrament Chapel and St Paul’s Chapel) who designed the mosaics of the National Gallery foyer; Tom Phillips CBE RA (Chapel of St George and the English Martyrs and the St John Henry Newman panel) and Christopher Hobbs (St Joseph and the Holy Family Chapel and the St Alban panel). The mosaics of the Lady Chapel were designed by Gilbert Pownall and include pictorial references to London: Tower Bridge and the Tower of London.

The only chapel which truly represents Bentley’s style is the Holy Souls Chapel on the north aisle with its dramatic Art Nouveau themes. Bentley had asked the artist and designer William Christian Symons to produce a design and they worked closely together. The architect favoured, ‘A severe and very Greek style.’ He always insisted that for mosaic, the design should be simple.

Traditionally, mosaic is applied by hand, piece by piece, the direct method. This results in a shimmering effect which is particularly noticeable in the Holy Souls Chapel, the Lady Chapel and in the fish scale ceiling of the Chapel of St Andrew. Modern mosaic is significantly cheaper and applied indirectly, resulting in a more matt effect. The mosaic is built up in reverse and a temporary surface, such as paper, is used to transfer the mosaic to the required location. Bentley would not approve. He considered the modern method ‘utterly flat and lifeless’.

One of the more recent mosaic decorations in the Cathedral is the representation of St David, designed by artist Ivor Davies. The mosaic was blessed by Pope Benedict XVI in 2010. 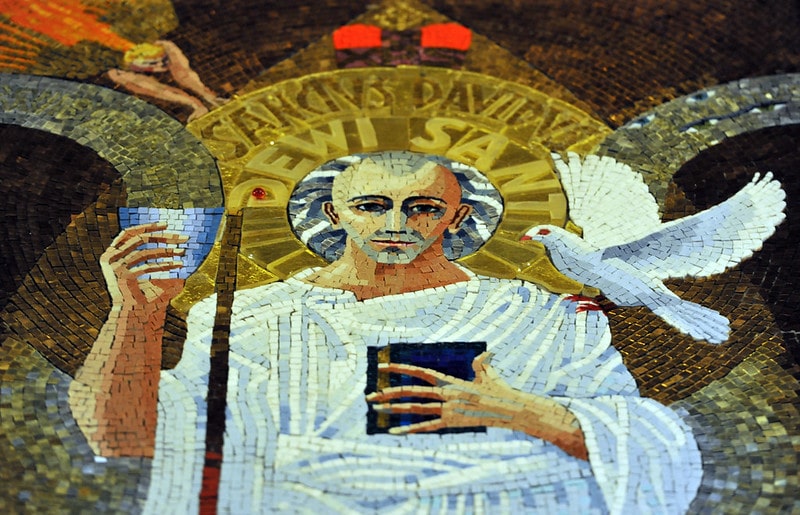 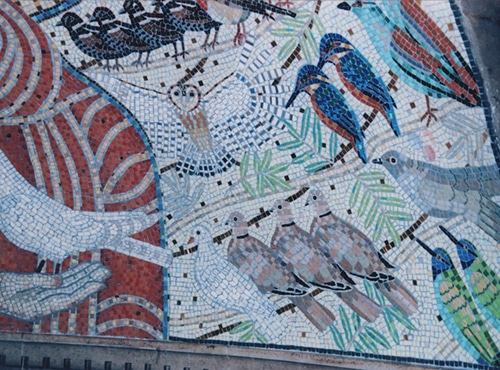 The mosaic song birds that surround the stunning image of St Francis designed by Leonard McComb or the russet brown crab in the marble floor of St Andrew’s Chapel. 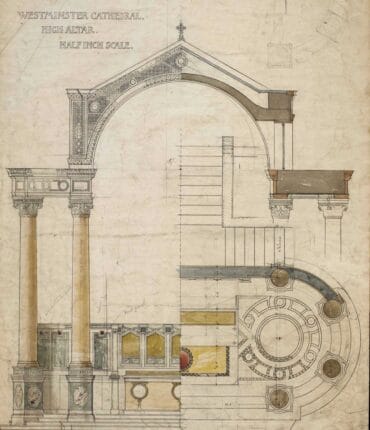 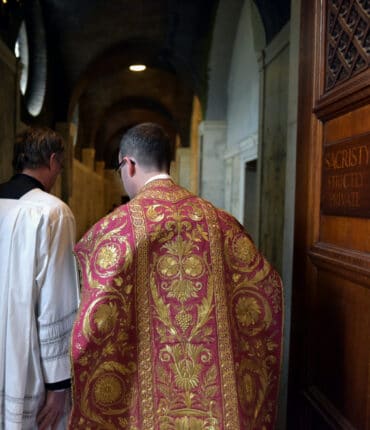 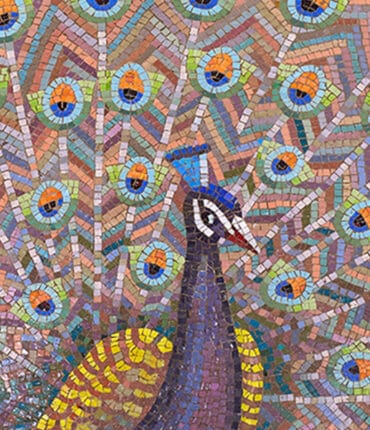