Westminster Cathedral was built at a time of great social and artistic change in England. It is a unique building that combines the very best of the Victorian and Edwardian eras with groundbreaking art and design from the modern age.

The last great masterpiece of the 19th Century

Westminster Cathedral was designed by the architect John Francis Bentley. Completed in 1903, it exemplifies the principles that he held dear: a concern for sound construction, a love of colour and fine materials, and exquisite detail throughout. But the building’s form is also the result of close collaboration with Cardinal Herbert Vaughan whose vision and dynamism inspired the building project. Cardinal Vaughan wanted a building with a large interior space, mirroring the early Christian basilicas in Rome. Bentley interpreted this with his unique version of Byzantine- Christian architecture. The result is ‘one of the most potent buildings in London’; a building that evokes a strong emotional response.

Today, the dramatic striped, red-brick and Portland stone frontage dominates the streetscape of Victoria, but this view is relatively recent. Originally, the Cathedral was hidden from the main thoroughfare of Victoria Street with the site enclosed by mansion blocks. The elaborate portal was intended to be seen at an angle. The piazza was opened up in the 1970s revealing the full impact of the building. The drama of the exterior is matched by the unexpected drama of the vast interior space. Step into the cool quiet of the Cathedral and the brilliance of Bentley’s achievement is realised. 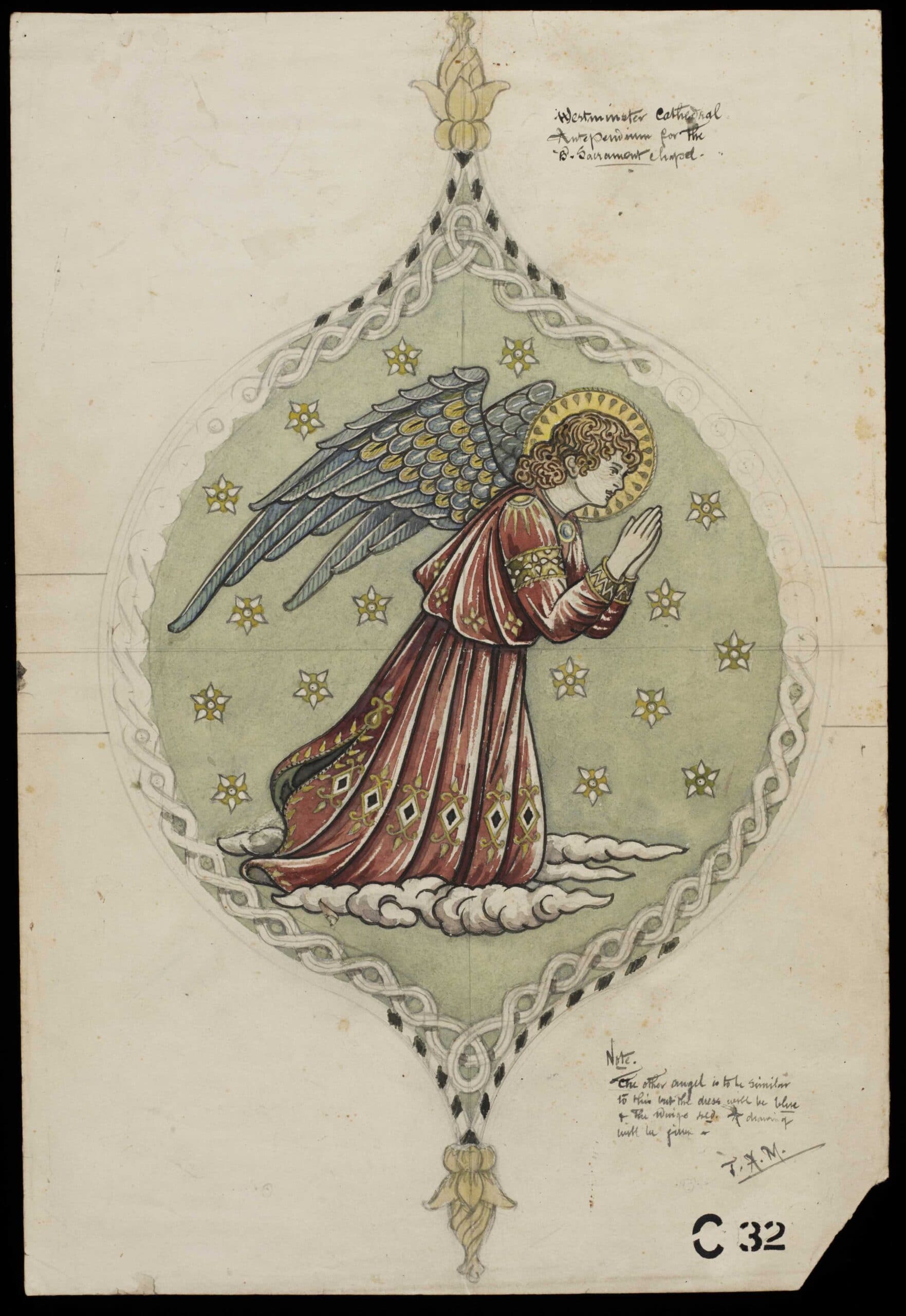 ‘For the honour and glory of God’ 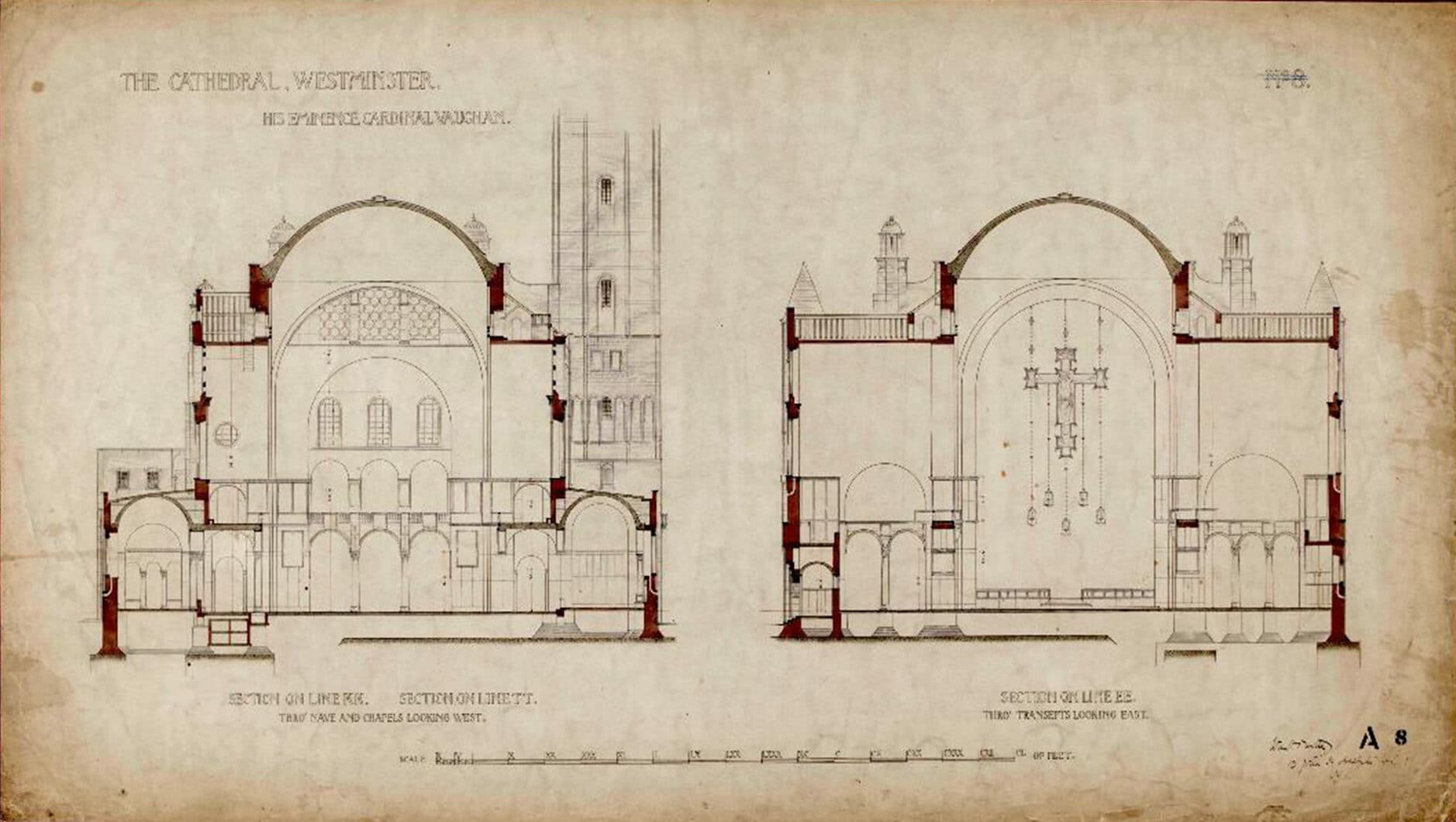 A bird’s-eye view of London

The Cathedral’s bell tower, or campanile, can be seen from across the city. Standing at 284ft high, it is a reminder of faith at the heart of London. If you visit Buckingham Palace for the Changing of the Guard, look up and you will see the campanile of Westminster Cathedral.

A lift ascends to the Tower Viewing Gallery with a breathtaking view of London north, south, east, and west. Carved stone eagles encircle the apex. This is a good vantage point from which to look down on the roof and turrets of the Cathedral. Bentley resisted the use of iron in architecture and the three great domes of the Cathedral are constructed from concrete. 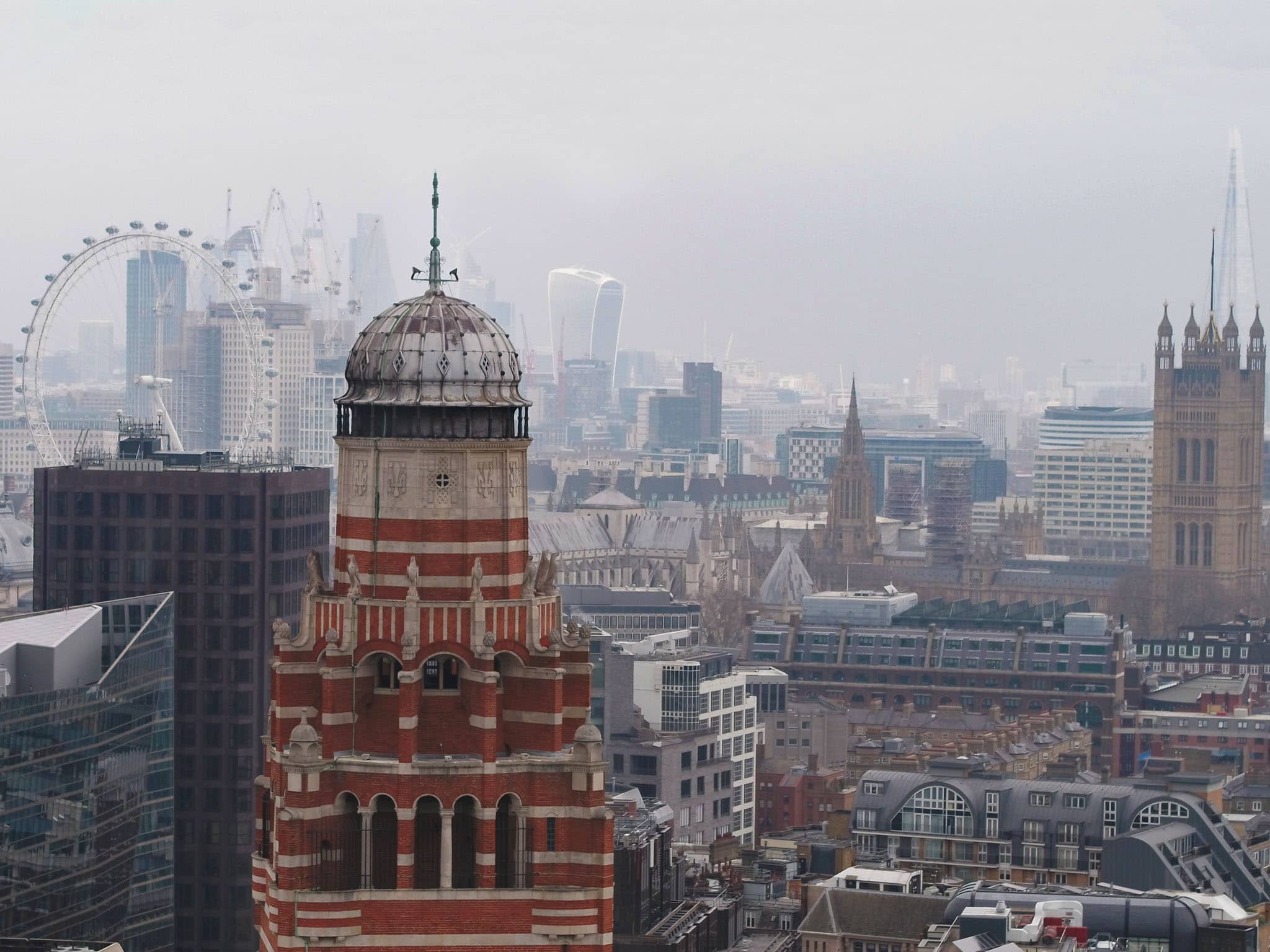 A permanent exhibition in the upper gallery showcases some of Westminster Cathedral’s most important treasures: rare ecclesiastical objects, vestments, chalices and sacred relics, including the prayer book of St John Southworth and the stunning jewelled morse worn by the Archbishop of Westminster at his installation.

The impressive Westminster Cathedral model is a highlight of the exhibition. Commissioned by the architect JF Bentley in 1896, it was built by the firm of Farmer and Brindley which worked extensively on the marble decoration of the cathedral. The 1:48 model is made of Kauri pine – a softwood native to Australasia – and is architecturally precise, both inside and out.

Bentley used it as an aid while working on the Cathedral and it is still used today, by the Cathedral’s Art and Architecture Committee, to settle points of artistic and architectural reference.

Saints, popes and royalty have visited Westminster Cathedral. At the main west door, you will walk across a marble inscription that recalls the visit of Pope Benedict XVI in 2010. At the foot of the sanctuary steps look out for the inscription that recalls the visit of St John Paul II in 1981. This is the only Cathedral in England where two popes have celebrated Mass.

Her Majesty Queen Elizabeth II has visited the Cathedral twice, both times at the invitation of the late Cardinal Basil Hume. She attended Vespers in 1995 during the Cathedral’s centenary celebrations; the first attendance by a monarch at a Catholic liturgy since the Reformation. The ‘Queen’s chair’ is in the Chapel of St George and the English Martyrs.

A glass casket contains the remains of St John Southworth – one of the last Catholic priests put to death during the interregnum of Oliver Cromwell, and the Cathedral’s own saint. This faithful and courageous priest ministered to the poor and the sick of Westminster before he was finally captured and sentenced to death. His feast day 27 June is celebrated as a solemnity in the Cathedral and for a number of days his casket is placed in the centre of the Cathedral nave; a mark of his importance to the Cathedral community.

The first Catholic bishop to the Americas is buried in the chapel of SS Gregory and Augustine. Bishop Richard Challoner was consecrated bishop in 1740 with responsibility for much of southern England, the Channel Islands, the West Indies and the new American colonies. He ministered to Catholics in England at a time when penal laws were still in place, and the practice of the Catholic faith was forbidden. He died in 1781 and his remains were re-interred in Westminster Cathedral in 1946.

Throughout the Cathedral you wll see the tombs of previous Archbishops of Westminster. There is just one layman buried in the Cathedral and that is Count Benckendorff, a former Russian ambassador to the Court of St James, whose tomb is in the Crypt chapel. 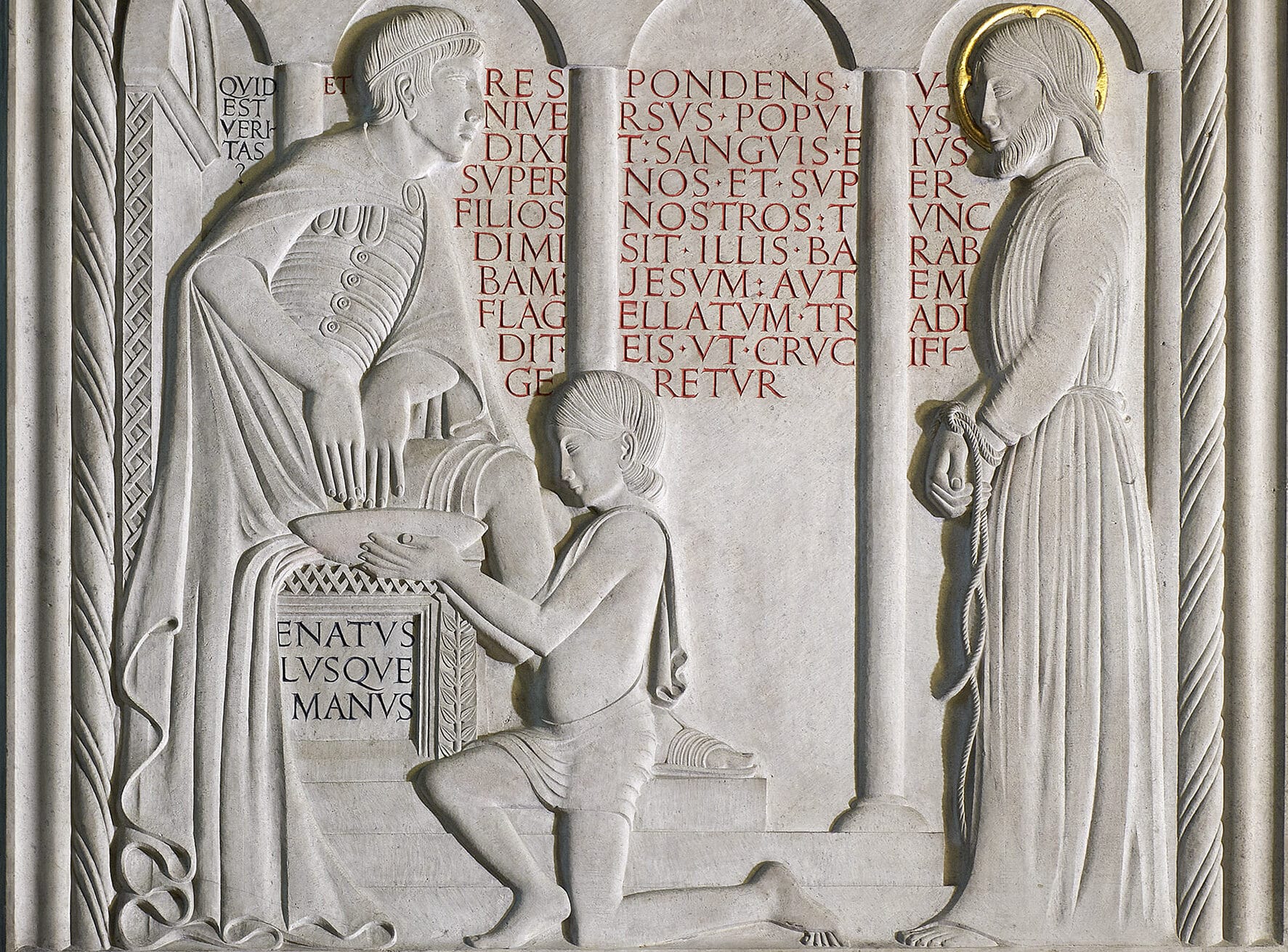 The Cathedral’s Stations of the Cross: beautiful, compelling, challenging. 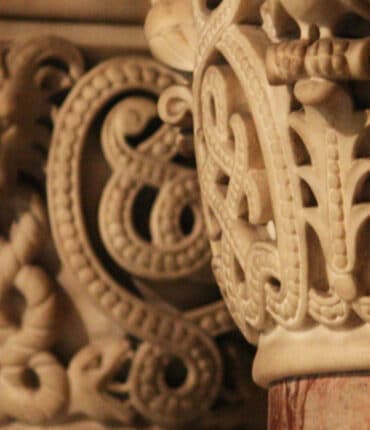 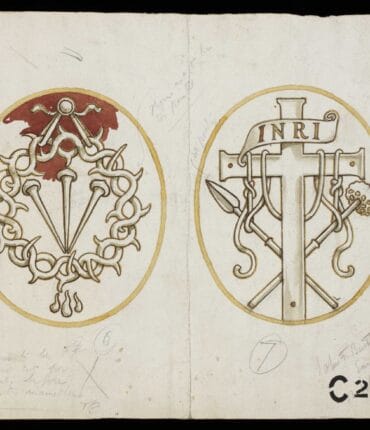