As a new building, Westminster Cathedral had no legacy of art or treasure to inherit. The historic and beautiful items which the Cathedral treasures today are mainly gifts or commissions. These are not museum pieces. The beautiful vestments and Church vessels continue to be used, as they should be used, in the celebration of Mass.

Our Lady of Westminster

Beneath the thirteenth Station of the Cross is a 15th-century statue of Our Lady and the Christ child, acquired for the Cathedral in 1955 and installed as Our Lady of Westminster. She is carved in English alabaster, likely from Chellaston near Nottingham which in the 14th and 15th centuries was a major production centre for religious statues that were especially popular on the continent. The statue depicts Our Lady seated on a throne as the Queen of Heaven with a lily sceptre in her left hand; her right arm supports the Christ child. Nottingham alabaster was traditionally brightly painted and flecks of paint remain: blue and red on the gown, and at Our Lady’s feet a green meadow strewn with daisies. The statue is flat backed, and partly bas relief. She may have been intended for a wooden altarpiece.

The statue was acquired by an ecclesiastical dealer in France in the 1950s and put up for sale at the Grosvenor Antiques Fair in London. The Dean of York had already placed a bid for York Minister and launched a public appeal to finance the acquisition. Undeterred, Westminster Cathedral’s Administrator Monsignor Gordon Wheeler said: ‘If the arrangement were to fall through, I would be very grateful if you would let me know.’ 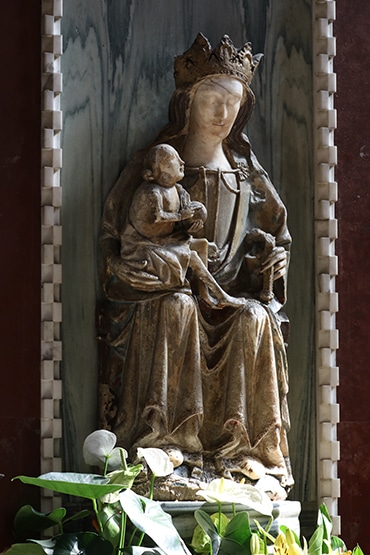 Our Lady of Westminster

Bentley wanted the high altar and baldacchino of the Cathedral to be the ‘crown of his work’ and the drawings he prepared for the sanctuary were his last. The beautiful altar cross of gilt bronze and enamel was designed after Bentley’s death by the firm he founded, Bentley, Son and Marshall. It was used for the first time at the Mass of Consecration in 1910. Find out more about the Cathedral’s history

The cross is 7ft 3in in height and 2ft 9in wide and matches the candlesticks on either side. It is very heavy. Pendants of pear-shaped crystal surround the central crucifix which is cast in bronze; the arms of the cross are decorated with diamond-shaped lozenges of red enamel.

The first and last letters of the Greek Alphabet, Alpha and Omega, hang from the arms of the cross to symbolise the words from Revelation 22:13: ‘I am the Alpha and the Omega; the first and the last, the beginning and the end.’

The cross is best seen in the morning, especially in spring and autumn, when the rising sun streams through the east windows of the apse illuminating the crystal surround and creating a halo effect. 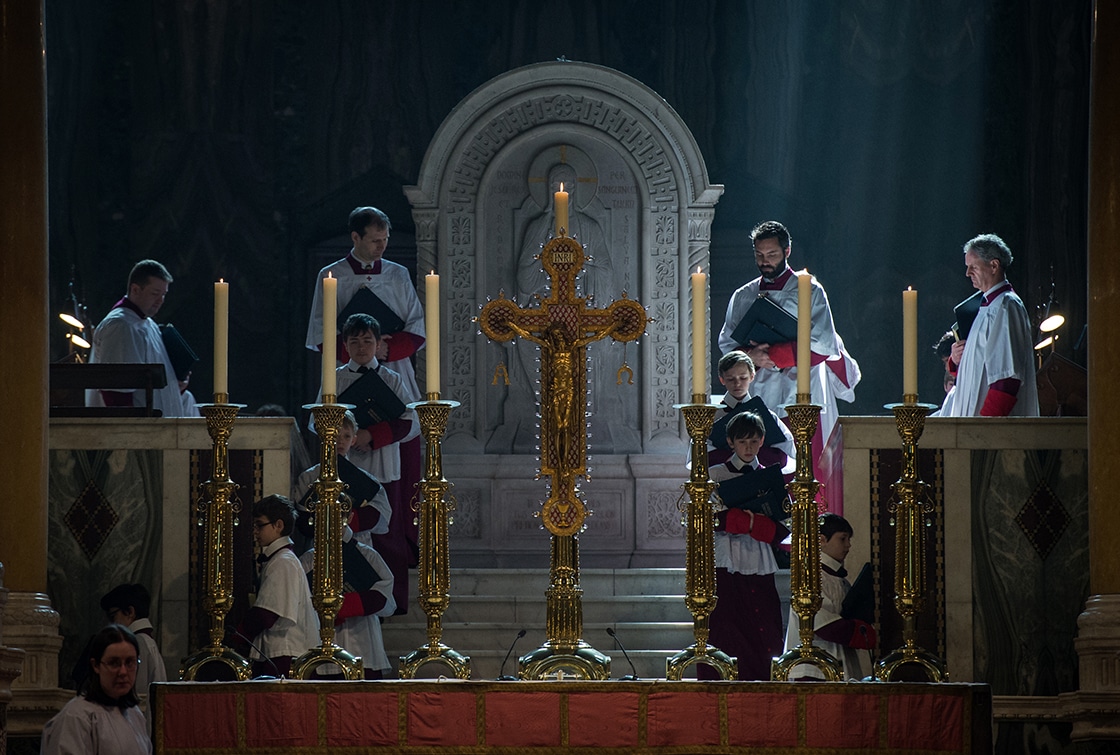 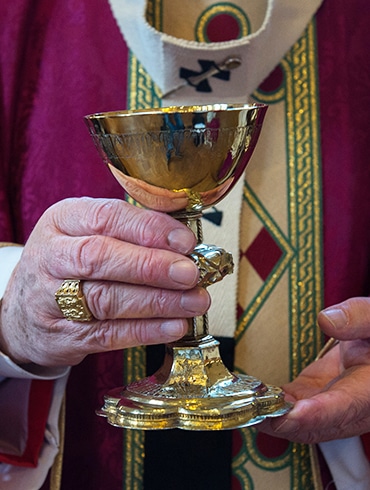 The so-called Henry VIII chalice was presented to the Cathedral by Baron Antonio French and his sisters Georgine and Blanche. Made in London in 1529 the chalice is silver gilt on a hexafoil foot, with a rouletted border, an engraving of the crucifixion and the inscription Crux SPI Salva nos Crux XPI Protege nos (Cross of Christ save us, Cross of Christ protect us).

The bowl is inscribed Vere pcepio corporis et sanguinis dni Jesu xpe (Truly the receiving of the body and blood of Christ – the communion prayer according to the Sarum Missal).

We do not know who the silversmith was; his maker’s mark is a sceptre. There are two other known chalices by the same maker, both dating from the 1520s; one in Wylye church in Wiltshire and another in the Royal Scottish Museum. 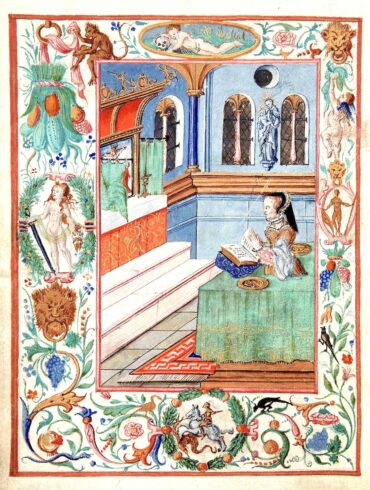 The Queen Mary Manual is an instruction booklet that belonged to Mary I of England for the blessing of cramp rings and ‘touching for the evil’. The monarch would bless the rings by touching them and would thus administer the ‘royal touch’ which was believed to have the power to heal, specifically cramp and the ‘falling sickness’ epilepsy.

The practice began in the reign of Edward III – Edward the Confessor – who was gifted a ‘miraculous’ ring by a pilgrim who had returned from the Holy Land. Mary was the first and only female monarch to perform the ceremony which took place on Good Friday. The manual is on vellum and includes exquisite, brightly coloured images of the Tudor queen. Armorial evidence in the book places it to after 1554 – the date of Mary’s marriage to Philip I of Spain. The book came into Cardinal Wiseman’s possession in 1851. You can find out more about the restoration of this important historical artefact here. 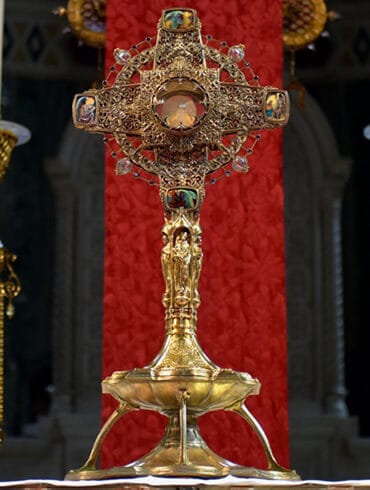 This beautiful monstrance, dating from 1907, was gifted to the Cathedral by a novice of the Poor Clares of Amiens, who was about to make her religious vows. In date and style it is concurrent with the Cathedral and shows remarkable workmanship.The monstrance is 30 inches in height and cast in silver-gilt. The cruciform head is set with eight enamel panels; the four on the front show symbols for the four evangelists; the four on the reverse show the risen Christ, the Virgin and Child, Christ blessing the host and Christ crucified. The diamond set oculus is surrounded with a square panel, depicting grapes and vine leaves, enclosed in a nimbus set with amethysts.

Omar Ramsden was one of England’s leading designers and makers of silverware. Until 1919, he collaborated with the silversmith Alwyn Carr. Both men were Roman Catholic and they produced a large number of liturgical items including a processional cross for Westminster Abbey which was used at the funeral of Diana, Princess of Wales. 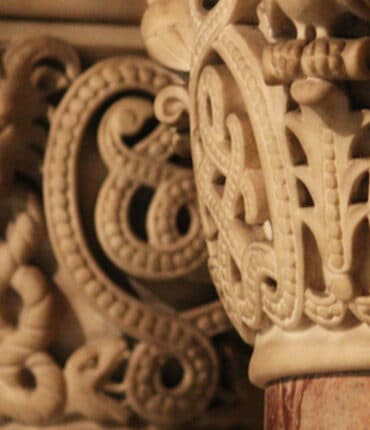 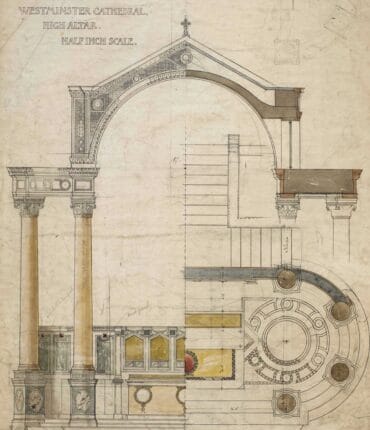 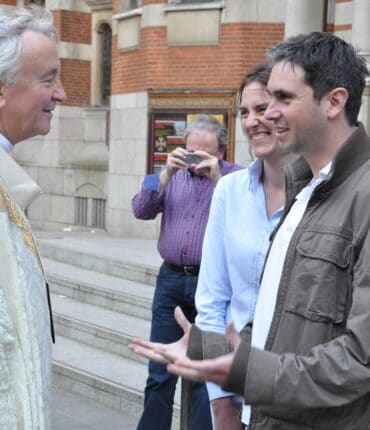 Sign up for our newsletter and register as a member of our parish to be the first to hear about our news and events.